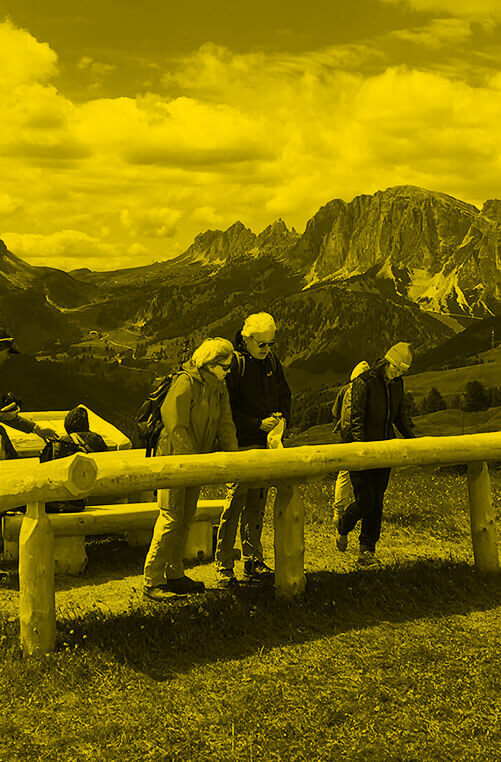 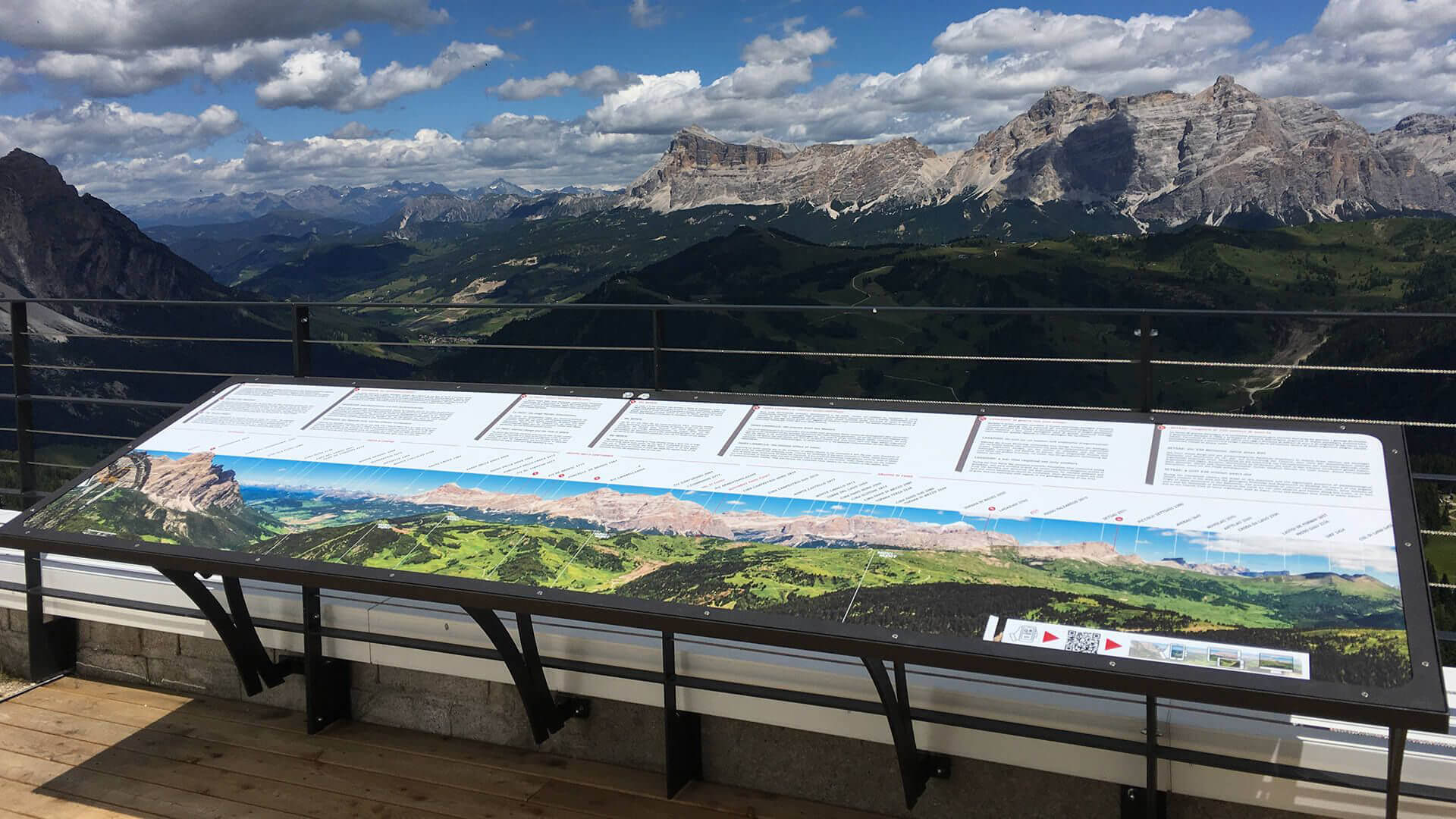 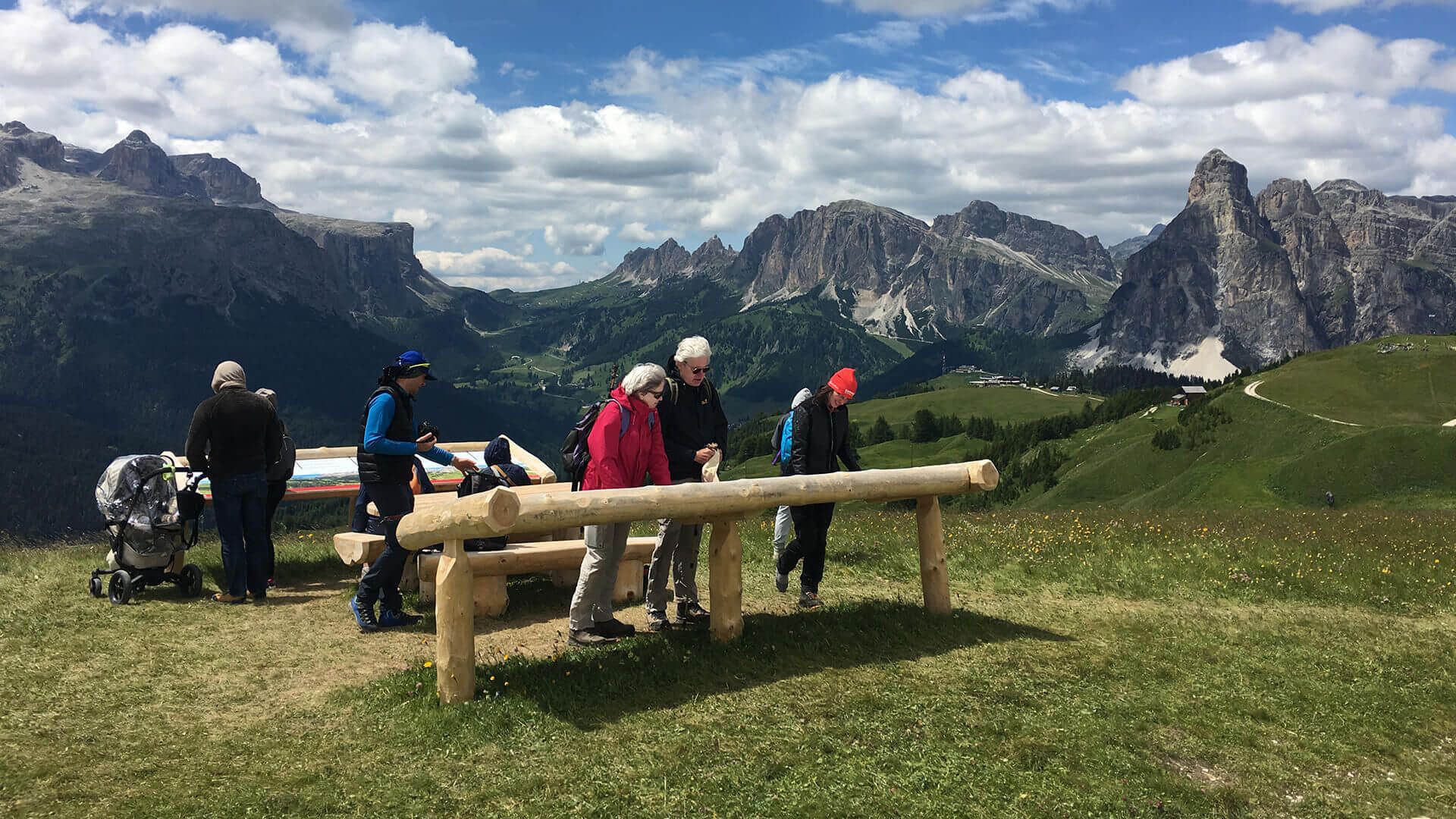 Observe the majesty of the Dolomites, understand the morphology, history and characteristics.
Between all the proposed activities in the Movimënt area, stop one moment and admire the extraordinary beauty of the nature surrounding you. The panoramic points, positioned upstream of the Boè cable car and on the path that connects Biok with Pralongià, will help you understand and learn many curiosities of the special UNESCO World Heritage mountains.


HOW TO REACH US | HOTEL AND ACCOMODATION

The landscape of the Dolomites: beauty to be preserved

The sensations you will experience as you gaze out at the panorama in front of you is a feeling which has trhilled all visitors to the Dolomites for centuries. This landscape of massive rock walls rising up above the green meadows and woods offers a beautiful, unique setting. The geological and geo-morphological value of this area has in fact been universally recognised. As a result of these characteristics, the Dolomites were included in the Wolrd Heritage List in 2009.

1. La Crusc: eternal change and the flow of debris
The debris that fell from fractured rocks and was later further crushed and broken up, especially as a result of the expansion of the volume of frozen water, can form part of landslides and the flow of debris. Over thousands of years the transposition and accumulation of materials have created new spaces which have been exploited by man.

2. Val Medesc
The valley and the path leading to Fanes develop along a fault line (a large fracture along which rocks move). On the right it is possible to note layers that are no longer horizontal and folded. These reveal to us how great movements that occured millions of years ago made the marine rocks of the Dolomites become the mountains that we now see.

3. Fanes - La Varella: the intense effect of water
Acquiring an acid quality due to the presence of carbon dioxide in the atmosphere and the soil, over thousands of years water has shaped the carbonate rocks, creating the landscape of the karst plateaus of Fanes, which have gained fame at world level. Infiltrating between the fractures, it has produced numerous unterground cavities, some of which are even hundreds of metres deep and well endowed with a variety of concretions. Today these caves are the subject of numerous scientific studies. They also include the Conturines Cave, famous for the remains of the Ladinic Bear.

4. The golden spike and the age of the rocks
A panel of international geologists recognised that between the layers of the rock surrounding the meadows at Störes, a geo-chronological point (GSSP - Global Stratigraphic Section and Point), which, in technical jargon, is referred to as a "golden spike". This is an important point of reference at world level and defines a specific period of time (228 million years ago) and the base of the Carnic Alps (late Triassic).

5. Lagazuoi: a war that required not only soldiers
During the First World War animated scientific discussions were conducted among geologists, who were enrolled in both the Italian and Austro-Hungarian armies to study the territory and determine the best positions for military outposts and forts and where manoeuvres should be conducted. Their detailed studies are still of great interest especially with regards to the geological survey of the area.

6. Set Sas: a cliff 230 millions years old
During the nineteenth century the shape of this mountain and the significant presence of palaeontological (fossil) remains in the area led the geologists Richtofen and Mojsisovics to develop the theory of the organic origin of many mountains in the Dolomites. The accumulation of calcium carbonate, which, after millions of years and for thousands of kilometres to the north we can now observe and follow along the trails, is in fact due to the intense work of many organisms, such as algae, coral and molluscs that lived in warm waters.

1. Marmolada: a delicate ice-bound environment
Known as the "Queen of the Dolomites", with a height of 3343 m a.s.l. Punta Penìa is the highest peak in the area. From a geological point of view it is mainly composed of limestone and is a former atoll of the Triassic period with lagoons rich in fossils. The name "Marmolada" refers to the glacier and the word derives from the Latin "marmor", indicating places or mountains that have a bright or brilliant appearance owing to the presence of snow and ice. Very white and easily visible from this site, it is currently the largest glacier in the Dolomites, but unfortunately it is subject to a process of reduction due to the steady rise in global temperature.

2. Campolongo Pass: landslides
Where the soils are mostly of the clay type the water that filters into the soil can cause rapid or more gradual landslides. Given the composition of the soil in Val Badia these are definitely widespread phenomena. For example, observing the route of the Campolongo Pass, starting from Corvara you will notice how it winds its way over a complex terrain formed by humps and hollows, which are the typical result of landslide accumulation.

3. Sella Group and its mountain passes: relations occurring among the rocks
If we observe Mount Sella, we will notice that it is a great mountain formed by broad "steps". Each of these steps, bordered by ledges of debris, represents a deep and warm marine environment from the Triassic period (240-220 million years ago). The massive light-coloured rocks (or "dolomie") represent the "carbonate platform", i. e. sea areas which are not too deep and where calcium carbonate is accumulated (thanks also to "contructing organisms"). At the mountain passes the sediment of the deepest marine areas surrounding the paltforms has gradually accumulated.

4. Sassongher: two "Dolomite rocks" and two different environments
Observing the Sassongher mountain, you will see that rising from a base of debris there is a large rock wall that presents certain differences. The lower part is massive and indistrinct (Cassiana Dolomite rock), while in the upper part (from about half-way up the rockface) the rocks are presented in layers (the principal Dolomite rock).This derives from the two different environments where the carbonate slurry (now Dolomitis rock) was deposited: 230 million years in a warm-sea atoll, 220 million years on a wide coastal plain and, again, close to a warm sea.

The Triassic World
The Dolomites are characterised by mountains isolated by passes and valleys. This orographic characteristic reflects a geological nature linked to the ancient presence of tropical fossil atolls. The ancient geography of the seas of the Mesozoic period is preserved and may be spatially identified. It is one of the best examples in the world. On the other hand, in a "bottom-up" observation of the Dolomites we can go back over millions of years as if we were reading a great book made of stone.

It is possible to see these mountains, still described in the panels nr. 1 and 2 of the panoramic point Biok - Pralongià.

2. La Crusc: eternal change and the flow of debris

5. Lagazuoi: a war that required not only soldiers

Dolomite rock: a new name
The identification of the mineral which has become the symbol of the Dolomites occured thanks to the work of a French nobleman called Deodat de Dolomieu. At the end of the 1700s he collected a sample from the South Tyrol - Trentino Alto Adige area. After having it examined it was realized that it was composed of an as yet unknown mineral which would be thereafter referred to as Dolomite rock.

From this panoramic point the Dolomites of Pelmo, Civetta anch the group of Marmolada can be observed.

Lady Geology
Matilde Gordon, Scottish by birth, was an outstanding figure in the study of the geology of the Dolomites and contributed towards the affirmation of women in the scientific world of her time (late 1800s), which was still almost exclusively dominated by men. Her passion for geology and the natural sciences brought her to the Dolomite valleys several times and she was inspired to write numerous scientific papers (e.g. Geology of the Wengen and St. Cassian strata in the Southern Tyrol, 1893).

Hands-on: a variety of rocks all around us
The foms of the landscape reveal to us that erosion occurs in rocks of various types, having different compositions and colours and which are more or less resistant. Here, it is possible to observe and touch some of the rock samples collected in the mountains visible from this site.

Discovering the Dolomites: tourism in this region
Thousands of hikers annually visit the area of the Dolomites. In the early 1800s, driven by their scientific curiosity, European scholars began to travel through and observe these valleys. Their epic and difficult journeys laid the foundations of modern tourism. Travellers were innitially assisted by local people and occasionally at some of the inns. Later on various alpine lodges were opened for visitors (e.g. Val Badia: the Puez Lodge 1889) and new hotels, new roads and mountain routes and cableways were constructed.