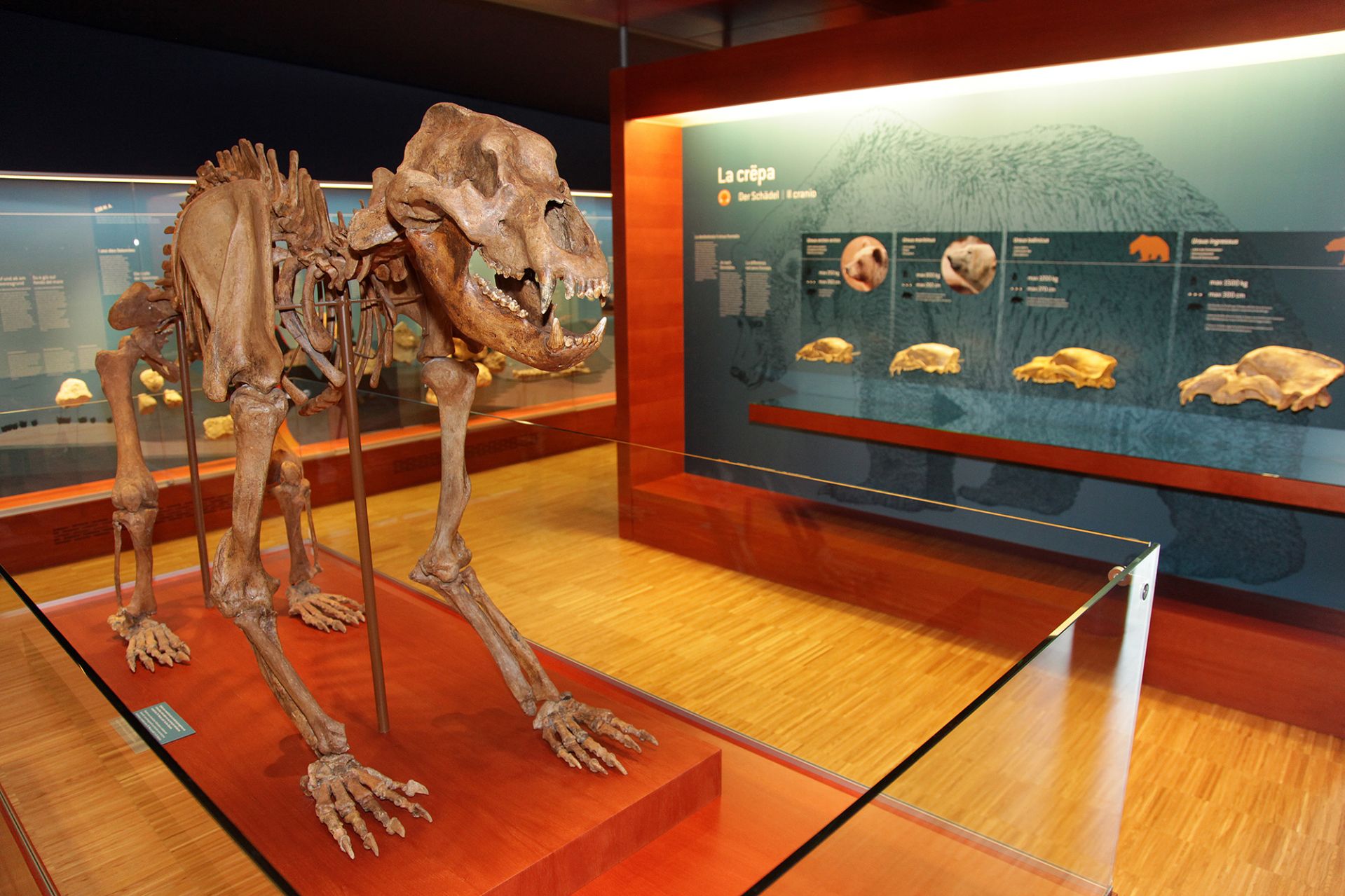 The bones of the "Ursus Ladinicus" were discovered on 23 September 1987 by Willy Costamoling of Corvara who, during a trip in the Conturines area, almost by chance went into a cave located at an altitude of 2,800 metres and found the remains of dozens of bears inside. The walk to the Conturines cave, where the bears' bones were found, takes 4 hours.

The remains were initially thought to be those of the more common and more well-known Ursus Spelaeus [cave bear]. In later years, the cave was studied and systematically explored by a research group from the University of Vienna, led by Professor Gernot Rabeder, whose studies gave sensational results: the Conturines bear belonged to a new species of cave bear, never described before. It was named "Ursus Ladinicus" in honour of the Ladins of the Dolomites.

According to the scientists, the presence of the "Ursus Ladinicus" would appear to prove that, during the interglacial period, these mountains used to have a far milder climate than today, with temperatures which allowed the woods to develop. In fact, nowadays, the tree line disappears beyond an altitude of 1,900 metres. An environment in which the bear, a vegetarian, could easily survive. These ancient, plantigrade animals used to frequent this entire area: the cave, with its entrance hidden by vegetation, must have made an excellent den not only during hibernation, but also for the females with their cubs.

The exceptional find in Conturines consists of the fact that this is the first and for now the only trace of the bear in the caves of the entire area in the Dolomites.

The bear remains found are on show at the new "Museum Ladin Ursus Ladinicus", where a permanent exhibition enables the visitor to learn more of many aspects of the distant past of the Dolomites, and opens up fascinating pages on the prehistoric age. The museum is a branch of the Museum Ladin Ćiastel de Tor in San Martino in Badia and has three exhibition floors: the exhibition begins by illustrating how the Dolomites were geologically formed and shows fossils discovered in the area around San Cassiano. It then proceeds to show the formation of the cave, the story of the discovery and the excavation. The original remains can also be seen, showing all the aspects of the environment and of the life of the bear in the Ladin caves.

The basement of the museum holds the "bear's cave", a reconstruction of some parts of the cave of the Conturines peak where you can admire the "sleeping bear". Inside the museum you can also compare the Ursus Ladinicus with an embalmed brown bear. A comparison of the shape of the teeth and skull clearly show that, whereas the brown bear is an omnivore, the Ursus Ladinicus was vegetarian. The brown bear was already widespread throughout the Alps at the time of the Ursus Ladinicus 40,000 years ago.
However, during the main period of the last glacial era 24,000 years ago, it disappeared from the Alps and from central Europe. To avoid the cold it retreated to warmer areas, whereas the Ursus Ladinicus, for reasons as yet to be clarified, was unable to do the same and became extinct.

At the Movimënt Park Piz Sorega, the Bear Park, you'll be able not only to admire a reconstruction of a cave with fun games and quizzes for the children, but also use a bucket and spade to dig up a copy of the bones of the "Ursus Ladinicus"!